Outside Support for a Black Culture Center 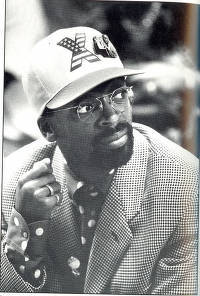 A long time elapsed between the opening of the BCC in the Union and the freestanding Stone Center, and there were numerous protests organized around this emotional issue by the BSM and the Black Awareness Council. There were sit-ins in South Building, a peaceful protest of about 400 marched to Chancellor Paul Hardin's house, and in 1992 1,000 students marched to Chancellor Hardin's office to request the construction of a building for a black cultural center on campus.

In 1992, director Spike Lee contacted the BSM after seeing a story in The New York Times about the fight for a freestanding BCC and came to speak at a rally in the Dean Smith Center along with Khalid Abdul Muhammad. After years of planning, discussion about where to build the center, and raising funds, the freestanding Sonja Haynes Stone Black Cultural Center opened in 2004.