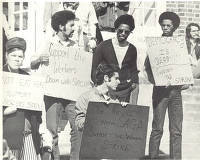 A few weeks after the strike began, African American students from around the state threatened to convene on campus if the strikers' grievances were not met. The strike ended on Monday, December 9, 1969, after weeks of negotiations between SAGA, the University, and the workers. Around 750 students from all over North Carolina met on campus on "Black Monday" for a victory rally. The workers won several concessions, including a non-discriminatory clause for promotions and employment, an end to split shifts, ten days of sick leave per year, and leaves of absence. SAGA's contract was not renewed the following year.