First Black Students at the UNC School of Pharmacy

Desegregation at the UNC School of Pharmacy

The UNC School of Pharmacy plays a pivotal and often underpublicized role in the desegregation of higher education. In 1933, Thomas R. Hocutt, a student at the former North Carolina College for Negroes (NCCN), applied for admission to the UNC School of Pharmacy. Hocutt was denied due to his race, which led two lawyers from the National Association for the Advancement of Colored People (NAACP) to file one of the first lawsuits against segregation in higher education. Hocutt v. Wilson paved the way for later arguments against segregation in higher education. However, Hocutt himself never attended pharmacy school: when North Carolina College refused to release his undergraduate transcript, Hocutt’s application was denied on a technicality. UNC would not admit Black students until forced to do so by court order in 1951. 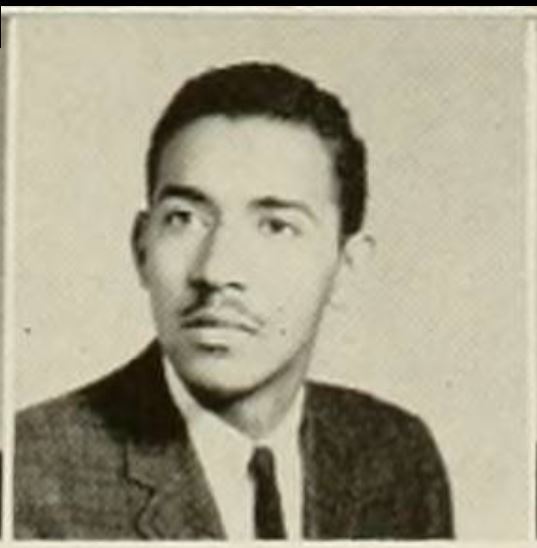 The UNC School of Pharmacy remained formally segregated until almost 30 years after Hocutt’s attempts to enroll. Even then, the school was integrated by accident.

William Wicker, raised in Forsyth County, North Carolina, decided to pursue pharmacy at a young age. He picked up his grandmother’s medication from the local Black-owned pharmacy, and the proprietor gave Wicker a job stocking shelves, cleaning the store, and working the soda fountain. He applied to UNC School of Pharmacy expecting to be denied and have the state fund his education at an out-of-state university. Although UNC had admitted Black students to other graduate and professional programs starting in 1951, the School of Pharmacy had not. According to Wicker, school administrators did realize he was Black when he applied: “My skin was fair, and my hair was okay, and they really didn’t know I was Black until I got down there.”

Wicker faced a hostile environment in the School of Pharmacy and on campus. “The environment was just ice,” he recalled. “[The other students] would not be seen speaking to a Black person on campus.” Wicker said that the faculty and school leadership were “just not ready” for him, and he left the program after a few years. Wicker re-enrolled in 1970. With the school under new leadership and no longer the only Black student in the program, he found a more welcoming environment, earning his degree in 1972.

“I didn’t feel like I was blazing a trail or fighting a battle or any of that. I just decided that I was going to go to the University of North Carolina at Chapel Hill and be a pharmacist. And that was my whole goal.” Wicker owned an independent pharmacy in Greensboro for 15 years. As of 2021, he works part-time at a pharmacy in Winston-Salem. 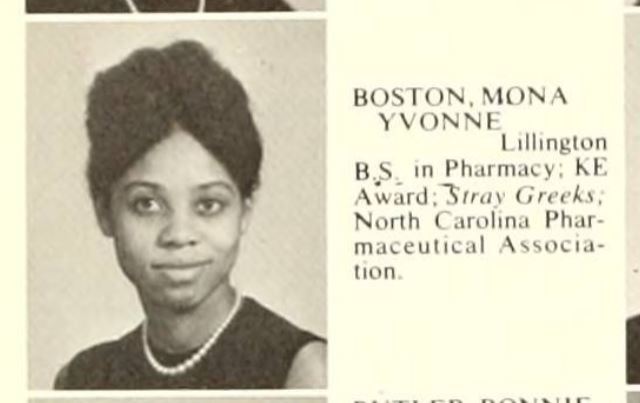 Mona Yvonne Boston grew up in Shawtown, a Black neighborhood outside of Lillington, North Carolina. Her original interests in mathematics and chemistry were directed toward pharmacy by a dinner party guest at her summer babysitting job. After three years at the Hampton Institute in Newport News, Virginia, she transferred to the UNC School of Pharmacy in 1965. In 1967, she became the first Black graduate of the school.

“It was an ambition of my dad to integrate school . . . . He said, ‘they will accept blacks now…who's going to go?’” Out of the three Boston girls, the lot fell to the youngest. Acting Dean John E. Larsh made an appointment with Reddick to welcome her to the school: “Much to my surprise, there were not police cars or marshals or people trying to protect the crowd . . . . The whole [pharmacy] student body was lined up on both sides of the sidewalk. I walked along, and they were friendly. When I got to the door, the Dean opened it and said, ‘Welcome to the School of Pharmacy. I want you to remember that you are the first.’” (Larsh was apparently unaware that William Wicker had attended the school a few years earlier. James Barnes, another Black student, was also enrolled at the School of Pharmacy at the time but was taking general education classes.)

Reddick was also welcomed by William Friday, President of the Consolidated University of North Carolina, who called her to the office to express that she was “just the type of person we wanted to see integrate the school.” Reddick had an active social life at the School of Pharmacy and at UNC, attending dances, sporting events, and joining the Kappa Epsilon sorority (KE is currently a co-ed fraternity.) However, when the time came for Reddick to graduate in 1967, she was unexpectedly asked to come later than other students to pick up her diploma.

As she recalls, Reddick became the first pharmacy intern at Mount Sinai Hospital in New York City. She worked at North Carolina Memorial Hospital as a pharmacist before becoming associate director of the drug abuse program at the UNC School of Pharmacy. 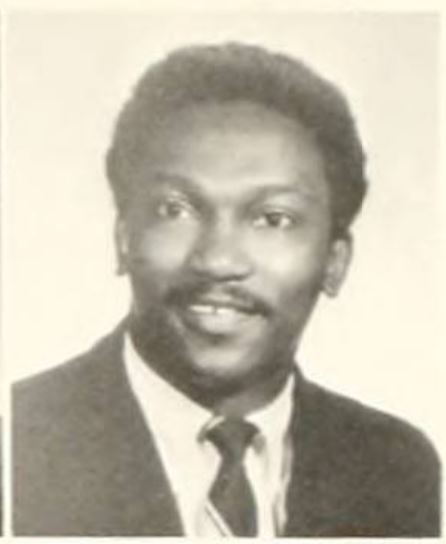 James “Jimmy” Barnes grew up in a large family in Greenville, North Carolina. His father encouraged the children to work part-time while in grade school, so Barnes clerked at Warren’s Drugstore in town where he witnessed the respect commanded by pharmacists.

Although Barnes wanted to attend an out-of-state HBCU for pharmacy school, family finances and high school guidance counselors persuaded him to support the integration efforts at local universities, such as UNC. Barnes enrolled in 1964. He described the Chapel Hill community as one of the most liberal places in North Carolina, however, Barnes socialized primarily with Black and Jewish students. Remembering interactions with white students on campus, Barnes recalled, “they were pretty much distant, you know, not a lot to say. They would smile and speak, but not particularly willing to strike up a conversation.”

After a year of isolation, Barnes was ready to leave and work his way into the Howard School of Pharmacy. His bags were packed before Barnes’s father convinced him to stay: “Pioneers get all the brush in their face. They go first . . ., but they make it better for everyone coming behind them.”

The mid 1960s were a time of transition for the School of Pharmacy leadership. With a new Dean and new faculty arriving on campus, Barnes found a more welcoming environment than he had initially faced. He recalled faculty members Fred Eckel and Steve Ciaola, who mentored Barnes and advised him to pursue a Master’s in Health Administration. Barnes graduated from UNC in 1969.

Christian Brown and Ben Urick, “’The Environment was Just Ice;’ Desegregating the University of North Carolina School of Pharmacy.” Points blog, Alcohol & Drugs History Society and the American Institute of the History of Pharmacy, 22 February 2021. https://pointshistory.com/2021/02/22/desegregating-unc-school-of-pharmacy/