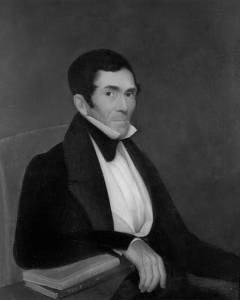 When the university opened on January 15, 1795, there were two buildings on the campus, Old East and an unpainted wooden house for the president. A pile of clay marked the foundation for the future chapel. The trustees had hired one faculty member, David Ker, granting him the title of presiding professor, and on February 12, Hinton James from Wilmington became the first student. By the end of the spring term, forty other young men joined James. In the next term, enrollment reached nearly one hundred students. That first year, the trustees selected Charles Harris as a tutor of mathematics.