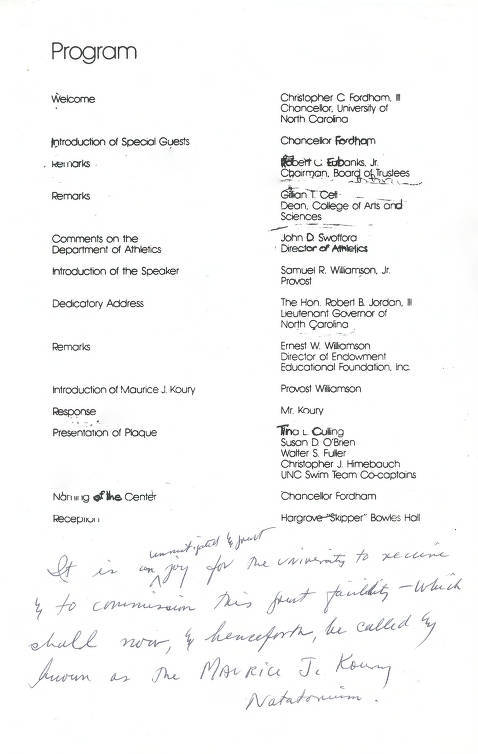 Bowman Gray Memorial Pool, named after president of R.J. Reynolds tobacco company and UNC alumnus Bowman Gray, Sr., opened in 1938 as part of the new Woolen Gymnasium. The Olympic-sized pool was the first indoor pool on campus since the closing of the Bynum Gymnasium pool fourteen years earlier, and was funded in part by a grant from the Public Works Administration. The rest of the funds were contributed by university donors, including the family of the late Bowman Gray, Sr.

In 1986, the university's swimming and diving teams moved to the Koury Natatorium, next to the Dean Smith Center. The 50 meter by 25 yard pool holds 1 million gallons of water and features one-meter, three-meter, and five-meter diving boards, underwater speakers and observation booths. The facility is ranked as one of the best in the nation for competitive swimming and diving.

The photos show, from left to right, respectively, Bowman Gray Memorial Pool under construction, a diver enjoying Kessing Pool in the 1950s, and a page from the Koury Natatorium Dedication program, with Chancellor Christopher Fordham’s speaking notes.