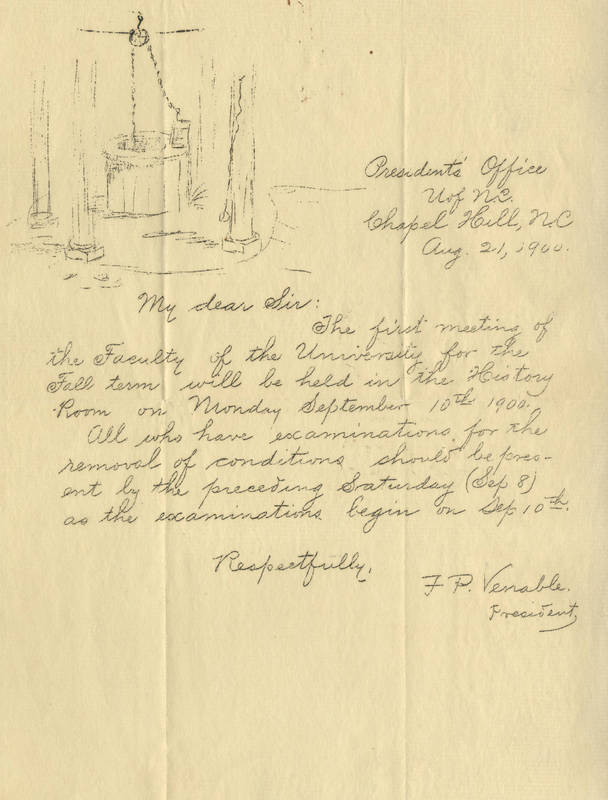 On January 21, 1795, the Board of Trustees of the University of North Carolina resolved "that the Commissionary for carrying on the buildings of the University be authorized to cause a Well to be sunk, and erect such necessary buildings as they conceive useful for the Institution." Soon after, a well was dug and covered with a wooden shelter. For most of the next century, students, faculty, and staff of the university relied on this well for their drinking and bathing water.

In 1897, university president Edwin Alderman proposed the building of a new structure over the Old Well, based on the Temple of Love at Versailles. The structure was designed by Eugene Lewis Harris, a portrait artist and registrar for the university, and is now the most recognizable symbol of the university. In 1900, a pump was installed at the well, which was replaced by a drinking fountain in 1925. In 1954, the original structure was razed and replaced with a sturdier replica, featuring wooden pillars with marble bases and a copper dome.

On the left is a 1900 letter from President Francis P. Venable, in which he drew a sketch of the Old Well. At center, young men sit at the well in the early 20th century. On the right is the hook once used for drawing water at the well.