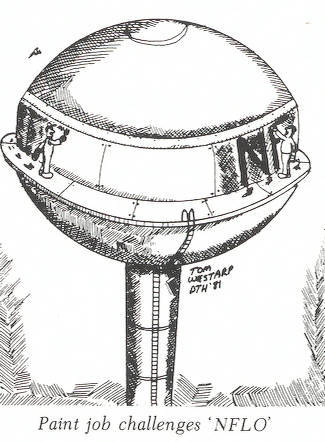 The one million gallon water tower on Manning Drive was built in 1957, and was long a favorite target of student graffiti artists, despite having a locked gate blocking its main stairs and no access ladders nearer than 35 feet from the ground.  In the 1960s and 70s, it was decorated with slogans and acronyms including "NROTC" (Naval Reserve Officer Training Corps), and "NFLO," ("Ninth Floor Liberation Organization," a reference to students on the ninth floor of Morrison Residence Hall). In 1981, Orange Water and Sewer Authority (OWASA) had the tower repainted at a cost of $73,000, and circled the tower with an eight-foot barbed wire fence and installed alarms to deter future vandalism.