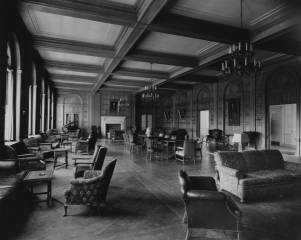 After the university completed a building for the YMCA in 1907, it served as a student union as well as a place for religious study. In 1931, the university opened a separate union building, Graham Memorial, which offered a large lounge, offices, a bowling alley, and a barber shop. Alumni remembered the lounge for its beauty, especially its chandeliers and oak-paneled walls. There students could read the latest newspapers and magazines and listen to lectures and concerts. Student political campaigns also took place in Graham Memorial. When a new student union opened at the Pit in 1968, Graham Memorial became the home of the dramatic arts department. In 2000, the university renovated the building and made it the home of the honors program.