Students on the way to class on Polk Place, 1930s 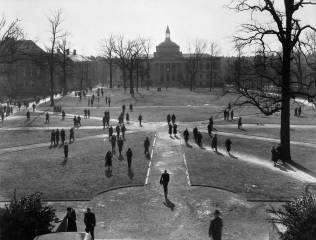 The 1930s saw a significant reordering of the curriculum. Reduced tax revenue during the Great Depression forced cutbacks in public schools and universities, as well as the consolidation of the state’s three leading public universities, the University of North Carolina, the North Carolina State College of Agriculture and Engineering, and the North Carolina College for Women. At a time when high schools had to reduce the number of courses they offered, the Carolina faculty recommended that the curriculum for freshmen and sophomores take into consideration the background students had had in high school. At the same time, they wanted to make the first two years of college an introduction to the basics of a college education. In 1934, all three campuses of the consolidated university established general colleges for freshmen and sophomores and required students to take courses in three areas: the humanities, the social sciences, and the sciences and mathematics. Each semester for two years, students took a course in English, a foreign language, mathematics, a basic science course, and a social science course. During the last two years, students took courses in their major as well as electives.