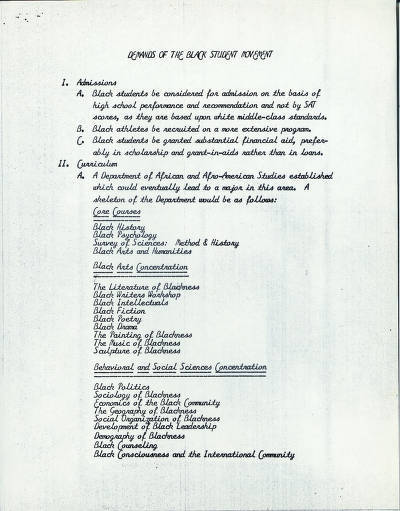 While some schools in the nation were taking major steps to improve university life for African Americans, the BSM thought UNC lagged behind. On December 11, 1968, they presented Chancellor Carlyle Sitterson with a list of 23 demands intended to give African American students more opportunity and representation at the University. The demands included the creation of an African American Studies department at the University, an office that would be responsive to black students' needs, and a change in admission policies to be based on grades and not SAT scores. Six weeks later, Sitterson presented a nineteen-page written reply showing his intent "to be responsive to the educational needs of . . . all races, colors, and creeds" and also asserted that the "University cannot, in policy or practice, provide unique treatment for any single race, color or creed." Hundreds of letters from the public and alumni poured into the Chancellor's office agreeing with Sitterson's firm stand. The demands made many alumni and Chapel Hill residents nervous, especially after a student take-over of the administrative building at Duke in February 1969 resulted in police firing tear gas on protestors. Many students and faculty, on the other hand, felt the Chancellor's response was inadequate and dismissive, and numerous protests and sit-ins were organized by groups such as the Southern Student Organizing Committee. UNC faculty members organized a petition supporting the BSM, and athletes Bill Chamberlain and Charlie Scott met with Chancellor Sitterson to show their support for the demands, the majority of which were met within five years.

-- Photo: Records of the Office of Vice Chancellor for Student Affairs, University Archives