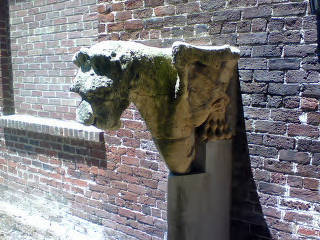 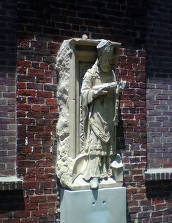 Katherine Pendleton Arrington was visiting London in 1933 when she saw three statues--two gargoyles, along with 13th-century archbishop of Canterbury Steven Langton--being removed from London’s Westminster clock tower, commonly known as Big Ben. More than eighty years of English weather had corroded the statues to such a degree that they needed to be replaced. Mrs. Arrington struck a deal whereby she was able to obtain them if she paid for the stones that would be used to construct their replacements. She donated the three statues to the University, where they remained in storage until a few years later when Person Hall was renovated as an art gallery. Mrs. Arrington was a benefactor of that renovation as well.