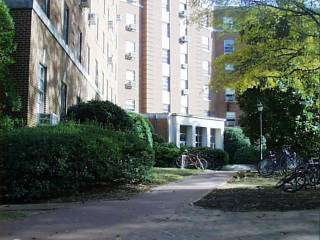 This high-rise residence hall, completed in 1962, was named for former Governor John Christoph Blucher Ehringhaus. A native of Pasquotank County, North Carolina, Ehringhaus graduated from the University in 1902 and received his law degree in 1903. As a young state legislator, he supported the expansion of the state’s high schools. He was elected governor in 1932 and was forced because of the Depression economy to cut the salaries of state employees and reduce the budgets of state agencies. He also oversaw the imposition of the state’s first sales tax, levied by the General Assembly to shift support of the public schools from the counties. In 1934, he called out the National Guard to maintain calm during the General Textile Strike. After one term as governor, he returned to his law practice in Raleigh.