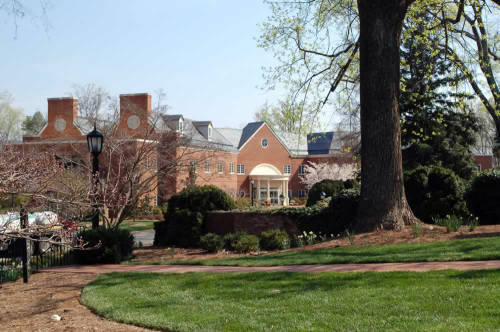 McLean Hall houses the business school’s executive education program and bears the names of James K. McLean, Sr., and his wife, Sarah McLean. Born in Maxton, North Carolina, McLean graduated from UNC with degrees in English and business. With his brother Malcom, he started McLean Trucking Company and Sea-Land Containership Corporation.   The McLeans developed the concept of containerized cargo shipping, a transportation system that revolutionized the movement of goods. Instead of truckers hauling goods to their destination, the McLeans envisioned trucking hubs at seaports where the goods were transferred to ships for the majority of their movement. The McLeans redesigned truck trailers into two parts: a truck bed on wheels and an independent box trailer or container that could easily be lifted onto a ship. By the end of the twentieth century, container shipping was transporting approximately ninety percent of the world's trade.