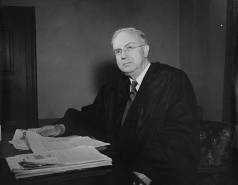 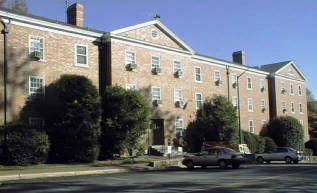 Completed in 1958, this men’s residence hall bears the name of John J. Parker, class of 1907. A native of Monroe, North Carolina, Parker graduated from Carolina’s law school in 1908 and then practiced in Charlotte, North Carolina. He ran unsuccessfully for governor against Cameron Morrison in 1920. Parker advocated many government reforms, but he also preferred that his political party be all-white, a stance at the time that was known as being a “lily white” Republican. He served on the U.S. Court of Appeals and in 1930 was nominated by President Herbert Hoover for the U.S. Supreme Court. His nomination failed because of opposition from the National Association for the Advancement of Colored People and labor unions. He continued to serve on the appeals court. In 1945-6, he was an alternate member of the Nuremburg Tribunal that put Nazi German officials on trial. He served on the university’s board of trustees from 1921 until 1958 and became a close associate of President Frank Porter Graham.