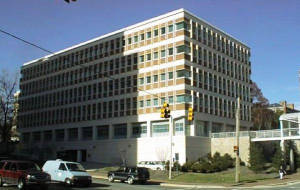 This 2000 building, named for one of its major supporters, Emanuel “Bud” Tarrson, houses the dental school . Born in Chicago, Tarrson was the chairman and chief executive officer of the John O. Butler Company, the Chicago-based maker of toothbrushes, dental floss and other oral hygiene products. He joined the company in 1949 and built it into one of the world’s largest manufacturers of dental products. Tarrson made major contributions to dental schools nationwide, establishing endowed faculty chairs and scholarships at Columbia University, the University of California at Los Angeles, Northwestern University, the University of Southern California, as well as Carolina. In addition, he established an endowed fellowship with the American Academy of Periodontology Foundation. At Carolina, he donated funds for this building and for scholarships.