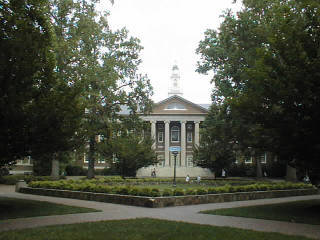 Built in 1923 for the law school, Manning Hall is now a classroom and administrative building. The university named it for John Manning, Jr., a lawyer, congressman, and university professor. A long-time trustee, he was a university graduate, fought in the Civil War with the Chatham Rifles, and supported the reopening of the university in 1875. When the university’s first law professor, William Horn Battle, died in 1881, Manning replaced him and expanded law school enrollment from seven to eighty-seven. His son, Isaac, became dean of the medical school.